Review of Where We Go from Here 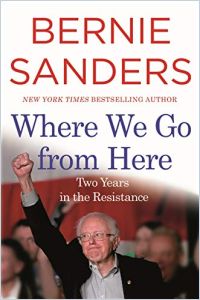 Bernie Sanders is deeply passionate about advancing a progressive political agenda in the United States. In his latest book, which functions as a platform for his 2020 presidential campaign, Sanders reflects on his role in politics from summer 2016 to summer 2018. He highlights accomplishments and discusses the issues that resonate most intensely for him. In fierce, yet hope-filled prose, Sanders calls for grassroots participation in politics and for individuals to stand up and fight against inequality in American society.

The topics covered in this slim text will come as no surprise to anyone familiar with Sanders’ politics. Sanders pulls heavily from various speeches he made between 2016 and 2018 to flesh out the key bullet-points of his progressive agenda. As a result, those who come to the book looking for new information on these goals, or greater detail about how Sanders might, as President, make them a reality may find themselves disappointed. Still, those wishing for a better understanding of Sanders’ day-in-the-life work as a US Senator will likely enjoy this read, as will voters wanting a solid overview of Sanders’s political priorities.

Bernie Sanders is a US Senator for Vermont. He was a Democratic candidate in the 2016 US presidential election.

Bernie Sanders doesn’t mince words when identifying what he sees as the key problems with American society today: It is becoming more like an oligarchy, where a small group holds all the power. Income inequality is on the rise, and America’s physical infrastructure, including roads and levees and bridges and airports, is crumbling. While the rich continue to get richer, the middle class shrinks. The active pursuit of a progressive agenda can bring about change, however.

In order to accomplish progressive goals such as ensuring that corporations bear their rightful tax burden, making the minimum wage a living wage and providing health care to everyone, America must prioritize economic, environmental, racial and social justice, Sanders argues. The nation’s citizens must work toward unity and peace, rather than embrace the division that President Trump fosters. Voter turnout needs to go up. Gerrymandering must stop. Voters and the media must evaluate political candidates based on the quality of the ideas they espouse, not by their backers’ checkbooks. Most importantly, Sanders writes, the drive for all of this change needs to come from the bottom up, through grassroots campaigns at local levels of government and beyond.