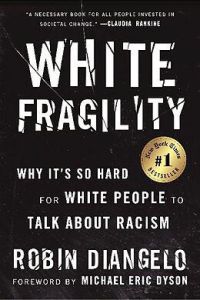 Why It's So Hard for White People to Talk About Racism

The review below was first published in the getAbstract Journal on Jul 10, 2020.
We’ve reviewed this title for you as we currently cannot offer a summary.

A Good Antiracist Is Hard to Find

All white Americans are racists, according to sociologist Robin DiAngelo. In White Fragility, she explores the compelling reasons why white progressives, against their own convictions, continue to perpetrate racial injustices and resist necessary conversations about race.

After the police killing of George Floyd in Minneapolis on May 25, 2020, Americans poured into the streets in protests and solidarity. At the same time, seeking to educate themselves about the United States’ seemingly intractable entanglement with racism, Americans also pored over books. At least, they purchased books in droves – histories, analyses, novels and even children’s picture books about racism and white superiority – driving some to the top of bestseller lists. One book led them all, becoming almost impossible to find in print during the weeks of the protests: Robin DiAngelo’s White Fragility: Why It’s So Hard for White People to Talk About Racism.

DiAngelo first published her concept of white fragility in an academic journal in 2011. The term gained currency a few years later after a mention in a Seattle alt-weekly – and then went viral, leading to a book contract with Beacon Press. White Fragility became a bestseller upon its publication in June 2018, attracting notice from the Washington Post, the New Yorker, Elle, Slate and NPR’s Morning Edition. In 2020, nationwide focus on issues of race and equality boosted DiAngelo’s book back to the top of the lists.

How White People Handle Diversity Training in the Workplace

How to Be an Antiracist
Book

So You Want to Talk About Race
Book

Between the World and Me