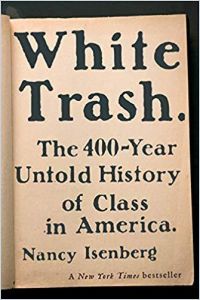 Since colonial times, poor whites – on tenant farms, and in trailer parks and backcountry cabins – were derided as “white trash.” Historian Nancy Isenberg offers a compelling account of their lives and class struggles. Many people in this group feel that progress tramples on their traditional views and conservative values, and threatens their jobs, beliefs and national identity. Meanwhile, Isenberg reports, society ignores, exploits, improves and admires them – but never views them as worthy citizens. Her treatise is a difficult discussion, but it is also timely, perceptive and evocative.

Nancy Isenberg, PhD, is the T. Harry Williams Professor of American History at Louisiana State University. She writes regularly for Salon and is the author of a number of books, including Fallen Founder: The Life of Aaron Burr.

The underlying problem, according to the author, is the United States’ disconnection between democracy and equality, marked by a class system that creates an uneven playing field. Isenberg notes that Trump wasn’t the first politician to win with the vote of the downtrodden. In 1828, an uncouth, outspoken, racist, combative candidate won the White House. President Andrew Jackson was a man of the people – commoners who didn’t own property and had little power over their lives and livelihoods. Yet, she clarifies, Jackson wasn’t poor; he owned slaves and property. As a former general and congressman, he was far from powerless.

The Memo
9
55, Underemployed, and Faking Normal
9
Black Software
7
The Color of Money
9
#MeToo in the Corporate World
9
Lying for Money
8