Summary of Why America Is Afraid of TikTok 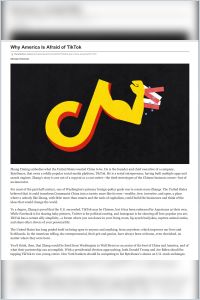 A Generation Z video app that showcases fun, self-made videos could trigger a reckoning regarding the United States’ goals and ideals. TikTok’s founder and its application are under fire because the company – not the app itself – operates from China. TikTok foreshadows what China seeks (world technical leadership) and what the United States dreads (loss of technical supremacy). Michael Schuman details in The Atlantic how the superpowers’ tussle over TikTok will reverberate for both nations.

Michael Schuman is the author of two books on Asia, Superpower Interrupted: The Chinese History of the World and The Miracle: The Epic Story of Asia’s Quest for Wealth.

A few years ago, United States’ investors would have celebrated TikTok. Now, China is more a “strategic enemy” than a possible partner.

Senator Josh Hawley, a Republican from Missouri, calls TikTok a “Trojan horse” that provides information to Beijing. The US government’s concern is that the Chinese could gather data about Americans from TikTok and use it for harmful purposes. For instance, given China’s record of collecting information on its own citizens, opponents believe it could use TikTok data to “identify or blackmail” Americans.

Zhang, who says he isn’t a Communist Party member, claims his government...

Forget TikTok. China’s Powerhouse App Is WeChat, and Its Power Is Sweeping.
8
Personal Finance TikTokers Are Misleading Users, and the Problem Is Worse Than You Think
8
Gen Z Trends Report
9
What If Working from Home Goes on…Forever?
9
China Deserves Donald Trump
8
The Panopticon Is Already Here
9