Summary of Why Are All the Black Kids Sitting Together in the Cafeteria? 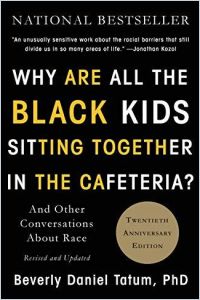 Educator and psychologist Beverly Daniel Tatum’s groundbreaking 1992 article Talking About Race, Learning About Racism and the first edition of this book received high acclaim. In this new edition, Tatum reviews the history of racism in the United States, updates its current state, debunks the myth of a post-racial America and explains the development of racial identity in young people of color. She hopes that understanding how systemic racism negatively affects all Americans will facilitate productive, forthright and honest conversations.

Beverly Daniel Tatum, PhD, President Emerita of Spelman College, wrote Talking about Race, Learning about Racism and Can We Talk About Race?

Despite increased levels of diversity in the United States, segregation remains entrenched in neighborhoods and, therefore, in schools.

Demographic diversity in the United States is increasing due to an aging Caucasian population, the birth of more people of color than whites, and immigration from Asia, Africa and Latin America. In most regions, neighborhoods and schools are more segregated in 2020 than they were in 1980. Most Black and Latinx students attend schools in which Blacks are the majority. Both groups are also more likely than whites to attend a school in which more than 50% of students live below the poverty line.

The quality of education is lower in schools serving poor, segregated neighborhoods due to having less experienced teachers, high faculty turnover, lower budgets and fewer resources. Between 1974 and 2007, Supreme Court decisions contributed to the increase in school segregation by eliminating programs designed to address racism, including cross-district busing, race-based admissions for magnet schools and desegregation oversight by the courts.

Black Fatigue
8
Diversity, Inc.
8
The New Jim Crow
10
The Color of Money
9
The Memo
9
How to Be an Inclusive Leader
9