Summary of Why Are We Yelling?

Portfolio, 2019
© 2019
From WHY ARE WE YELLING? By Buster Benson Summarized by arrangement with Portfolio, an imprint of Penguin Publishing Group, a division of Penguin Random House LLC.
ISBN: 9780525540106
Pages: 288 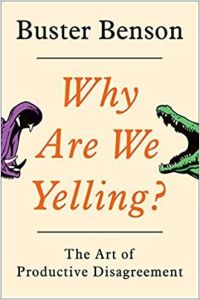 Can you learn to make conflict less unpleasant and more productive? According to technology entrepreneur Buster Benson, that goal is both possible and worthwhile. Benson lays out popular misconceptions about arguments and explains how your internal voice and your brain’s decision-making process can complicate your disagreements with others. According to Benson, all humans have cognitive biases, and this limits anyone’s ability to make sense of the world. His simple, useful introduction to this challenging subject will help you better understand and embrace the process of conflict resolution.

Buster Benson, a platform team leader at Slack, founded three tech companies and worked as an engineer, designer and product manager at Twitter and Amazon.

People believe arguments have the power to change minds.

A disagreement occurs when two or more people have a difference in their points of view. Many people believe they achieve nothing productive by arguing, but arguments perform a critical function: They highlight a threat to something you consider vital. You may tell yourself you don’t need to get so agitated, but if you suppress your feelings, you could become more anxious.

Often, people believe arguments can change minds. However, when a difference in opinion becomes too stark, generally you will want to change other people’s minds, rather than understand their perspectives. Realize that you have very limited abilities to change someone else’s viewpoint. You can change only your own beliefs and actions. Indeed, trying to change other people’s minds could backfire, since some people react to disagreement by digging in their heels. Arguments do not resolve over time, and the underlying causes of conflicts often persist. The point of contention might seem to disappear, but it can emerge again later.