Summary of Why GM Matters 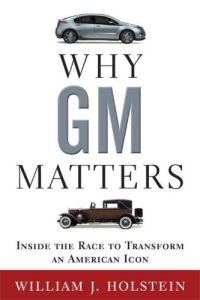 Everything reported in this book is just right – you only need to adapt to its time frame: The book ends with the 2008 national recession. It explains how General Motors hit a financial crisis in 2005, and how former CEO Rick Wagoner and his team tried to fix things before the federal bailout. Business journalist William J. Holstein’s cast of characters includes not only Wagoner and fabled former CEO Bob Lutz, but also a whole constellation of designers, engineers and marketing specialists in Asia, Europe, Australia and Detroit. Holstein tells GM’s story complete with behind-the-scenes sagas about the Camaro, the Volt, OnStar and the rise of Buick in China. All this is intriguing information, and the author’s insights remain valid even though the book ends with Wagoner testifying twice before Congress in 2008 before his ouster by the feds. Holstein fills you in on the situation before Wagoner’s departure, the government takeover of GM and Toyota’s recall crisis. If the events leading up to GM’s fall and rebirth still intrigue you, getAbstract believes this book delivers fresh reporting about the auto giant and its biggest drama.

General Motors remains important to building America, so insiders resent the shots the media take at it. Outsiders, they say, do not realize how much other sectors of the national and global economies, from robotics to health care, depend on GM’s research and purchasing volume. Critics are right about GM’s mistakes and how slowly it corrects them, but the company is still at the core of the U.S.’s remaining manufacturing might.

GM’s market position weakened continuously from the mid-’70s through the ’90s while its labor expenses and fixed costs, particularly health care, soared. GM’s leaders watched their wage, health care and pension costs rise dangerously for decades. Instead of hitting the brakes, every United Auto Workers (UAW) contract seemed to stomp on the gas, accelerating GM’s headlong rush toward a crash. Still, executives stuck with the obsolete business model, which had once made GM great, long after its effectiveness waned. Research and development languished as GM let Toyota dominate the hybrid market.

GM and Toyota began collaborating in some areas by 1982, because Toyota...

What Did We Know? What Did We Do?
8
The Apology Impulse
8
Temp
9
The Deals That Made the World
8
Indispensable by Monday
7
Leading Lean
9