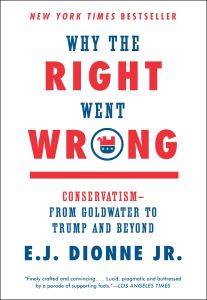 Book Why the Right Went Wrong

Conservatism – From Goldwater to Trump and Beyond

Just months before the election of Donald J. Trump as America’s next president, Washington Post columnist E.J. Dionne asked how American conservatism changed so deeply. He explores how it became more radical, and whether that philosophy threatens the Republican Party and the American governing process. Dionne concludes that the modern Tea Party is nothing new. He finds that conservatives and the GOP chose a fateful path by nominating Barry Goldwater in 1964 and embracing his ideology. Since then, Dionne finds, no Republican president or presidential candidate has satisfied or harnessed the right wing’s extreme philosophical purity. While always politically neutral, getAbstract suggests Dionne’s history and analysis to those concerned about US politics and participatory democracy. Since conservatives will control the White House and Congress beginning in 2017, applying his analysis will be quite intriguing.

Reagan, Goldwater and the Bushes

Current American conservatism traces back to Barry Goldwater’s unsuccessful 1964 presidential candidacy. When right-wing candidates pay homage to Ronald Reagan, they espouse the views of Goldwater, consciously or not. Goldwater sought to loosen the grasp of the New Deal on American government and politics.

Some conservatives, like William F. Buckley, tried to purge their movement of extreme voices such as the racism of the John Birch Society. Phyllis Schlafly’s “movement book,” A Choice Not an Echo, drove the party back toward the right. John F. Kennedy’s and Lyndon Johnson’s support of civil rights caused African-Americans to vote for the Democratic Party, but pushed Southern Democrats to migrate to the GOP. These developments, plus Ronald Reagan’s pro-Goldwater TV speech before the 1964 election, spelled the doom of the moderate conservatism that Dwight Eisenhower espoused in the 1950s. Johnson defeated Goldwater in 1964, but the GOP bounced back and won the 1968 election for Nixon by reaping the seeds Goldwater planted in the party.

Washington Post columnist E.J. Dionne Jr. provides analysis on current affairs on MSNBC, ABC News’ This Week, and National Public Radio. He is the best-selling author of Why Americans Hate Politics and Our Divided Political Heart. He is a professor at Georgetown University and a senior fellow at the Brookings Institution.