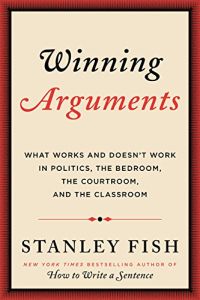 Don’t expect to learn how to win arguments by reading law professor Stanley Fish’s treatise. His main premise is that arguments pervade every aspect of life, never truly end and, therefore, cannot have a victor – at least, not a permanent victor. If you accept the certainty of argument and embrace it as all encompassing, you have clear motivation to get better at “argumentation.” At the least, you might learn to avoid the most fruitless of all arguments – those with your partner or spouse. Fish writes more about the philosophy of argument than practical techniques, but if the way discourse unfolds intrigues you, getAbstract – while always politically neutral – thinks you’ll enjoy his compelling exploration of why and how people disagree.

Award-winning professor and former dean Stanley Fish teaches law at universities in New York and Florida. He also wrote the bestseller How to Write a Sentence: And How to Read One.

The Natural State of Argument

People may strive to get along and cooperate but, eventually, argument prevails. Even when parties reach a resolution, their agreement rarely lasts. International agreements, peace accords, trade deals and other covenants, no matter how solemnly undertaken, exist only until one of the parties sees an opportunity to get more of what it wants. Small differences grow into large ones. Human beings never reach a state of “universal agreement”; conflict is the normal state of being.

You can’t avoid argument, so you might as well master it. Learn the art and techniques of rhetoric – the manipulation of words and appeals – as well as when, where and how to use them. Such knowledge gives you awesome power, far stronger than “sticks and stones,” tanks or missiles. Rhetoric and argument lie at the foundations of democracy, the rule of law and the heart of war. Words and arguments don’t merely hurt; they can tear a person in two and destroy worlds.

In John Milton’s Garden of Eden in Paradise Lost, Satan convinces Eve to eat the forbidden fruit by first sowing a smidgen of doubt in her mind about what God really meant when he warned ...