Summary of Winning the Brain Game 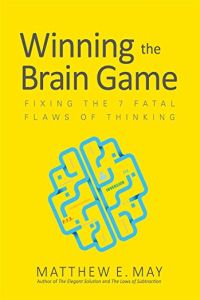 When you try to puzzle out a problem, your thinking can fail in seven predictable ways, such as leaping to conclusions, failing to ask the right questions and “self-censoring.” Strategy and innovation consultant Matthew E. May, an award winning author, says you can avoid becoming stuck in automatic thought patterns or prejudices if you recognize these relatively familiar, common cognitive errors and frame your problems carefully. May condenses research about thought patterns into straightforward, basic advice that can help you avoid sabotaging yourself. getAbstract recommends his lessons to executives and managers at all levels who are relatively new to the field of cognitive errors.

Speaker, facilitator and coach Matthew E. May writes on strategy and innovation. He also wrote The Laws of Subtraction: 6 Simple Rules for Winning in the Age of Excess Everything and In Pursuit of Elegance: Why the Best Ideas Have Something Missing, written with Guy Kawasaki.

In 2005, author Matthew E. May worked with 12 bomb technicians from the Los Angeles Police Department (LAPD) to help them prepare for new forms of terrorism. The approaches the LAPD once used to counter terrorism had stopped working well because the nature of terrorism had changed: Modern terrorists often function without leaders and act unpredictably.

The LAPD’s bomb technicians saw themselves as skilled in solving problems. They believed they learned quickly. May invited them to see themselves as innovators. He taught them that various approaches to perceiving a problem in a new light and then solving it have certain things in common. These processes follow a structured pattern of “questioning, framing, hypothesizing, ideating, testing” and “reflecting.”

May presented the technicians with a business problem he had previously offered to similar groups. He thought the bomb technicians would repeat the solutions other people had attempted that failed to solve the problem. Then he asked the technicians to see themselves as the owners of a fancy health club. As a perk, the club provides a bottle of popular, expensive shampoo in ...