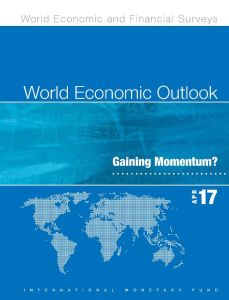 Global growth is slowly starting to get out of the rut it fell into following the Great Recession. The November 2016 election of Donald Trump to the United States presidency cheered global markets with expectations for tax reforms and fiscal policies that would stimulate growth. More recently, however, it appears that investigations into potential Russian interference in the US government could inflict major consequences on markets and the economy. The International Monetary Fund’s biannual report on the outlook for global growth delves into a variety of wildcards that could amplify risks, as well as policy actions that could aid growth. getAbstract recommends this comprehensive report – despite its occasional repetitiveness and rambling – to policy makers, executives, economists and investors.

Economic activity worldwide is trending upward, as investments, manufacturing and trade are finally showing signs of life. Global growth is likely to surge to 3.5% in 2017, from 3.1% for 2016, and to rise to 3.6% for 2018. Commodity prices have rebounded from their early 2016 drop amid restrictions to supply and projections of strong demand. Rising commodity prices have also helped boost inflation and suppress deflationary tendencies. Financial markets are ebullient on the prospect of deregulation and fiscal stimulus in the United States. If this strong sentiment continues, growth could accelerate even faster in the short term.

In the medium term, some sticky factors – such as income inequality and weak productivity advances – could stand in the way of recovery, and the risks are more to the downside. Insular policies could imperil “global economic integration,” which has been good for the world economy, especially for developing countries. If the Federal Reserve tightens US interest rates more rapidly than the market anticipates, higher rates and the stronger dollar could create a strain in other countries. If market sentiment were...

2016 Article IV Consultation with the United States of America
7