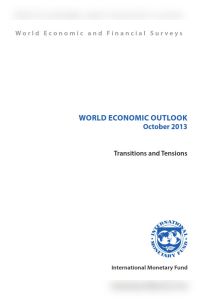 With the global financial meltdown in the rear view mirror, the world’s economies are traveling in new directions. Once battered by crisis, advanced economies are showing modest growth and good potential, while the formerly buoyant emerging nations are butting against structural and cyclical economic problems. Both camps must deal with high and chronic unemployment with its social, political and fiscal ramifications. Pending unknowns – like the impact of the anticipated end of the US Federal Reserve’s easing and a slowdown in China’s growth – create significant new risks. Teams of researchers and analysts from the International Monetary Fund tracked the world’s economies to assess their conditions and make some informed projections about 2014 and beyond. getAbstract sees the IMF’s comprehensive approach and reasoned analysis about the state of the global economy as required reading for bankers, business executives and economists.

The International Monetary Fund is a global organization that provides advice and financing to member states in economic difficulties and works to reduce poverty in developing nations.

The World at a Glance

Years after the 2008 financial crisis, global economic growth remains lethargic and still subject to significant “downside risks.” Yet the main players’ relative standing has changed. Data from 2013 show the US strengthening, the euro zone recovering and Japan surging. After their post-crisis rebounds, emerging markets face the prospect of less-buoyant growth.

High unemployment remains a chronic issue for most of the globe, but two recent, overarching factors will affect all economies in 2014 and beyond: The US’s accommodative monetary policy will eventually end, and China’s economic engine will likely moderate over the next several years. The end of fiscal easing in the US could be destabilizing, especially for emerging markets, while China’s slowing will ripple worldwide. In addition to these concerns, “old challenges” remain: The euro zone has yet to unify its financial and banking sectors, while the US and Japan must do better on “medium-term fiscal adjustment and entitlement reform” while reining in debt.