Summary of Yes We (Still) Can 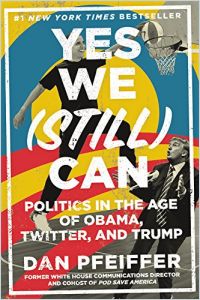 Dan Pfeiffer knows what it takes to help a presidency adapt to changing times. He worked on President Barack Obama’s election campaign and in his administration. He helped the Obama White House engage with the public, even while social media and a 24/7 news cycle created novel challenges. When Donald Trump won the 2016 election, shock set in, to put it mildly. Pfeiffer draws on his insider’s experience as a long-time Obama advisor to show what went right and what went wrong during his tenure, and what inspiration remains for regaining the hopeful outlook Obama exemplified. Pfeiffer addresses campaign tactics, communications plans, how to fight fake news, and the role of Republicans, among other topics. In so doing, he shows that engaging in politics isn’t just important, but that it’s fun and fulfilling, too. Part memoir, part instruction manual, this book pays homage to Obama (while trashing Trump in brazen language). The result is a well-informed, humorous and self-deprecating analysis about how the next generation of politically-active Democrats can move their agenda forward. At times, the cleverness seems so heavy that details get lost. Nevertheless, the tongue-in-cheek tone is unique and refreshing for political books.

Dan Pfeiffer worked for Barack Obama’s presidential campaign. He served as the administration’s White House communications director from 2009 to 2013 and senior advisor to President Obama from 2013 to 2015.

Dan Pfeiffer returned to the White House in 2017 to do an interview with his former boss, President Barack Obama, for his podcast, Pod Save America. After two terms, Obama was preparing to leave the White House and Donald J. Trump, a “racist reality TV star,” was about to be inaugurated. The podcast prompted Pfeiffer to reflect on his experiences in Obama’s campaign and in his administration, to consider how Trump became president, and to explain how Democrats might move forward from Hillary Clinton’s 2016 campaign loss.

Michael Dukakis gave Pfeiffer his start in politics. More precisely, Pfeiffer portrayed Dukakis in a televised mock debate in seventh grade, in 1988, against another student portraying George H. W. Bush. Pfeiffer tapped into his competitiveness and desire to win in preparing to embody Dukakis. He read everything he could about the candidate’s positions, had his father quiz him on Dukakis’s policies and came to the debate armed with facts. Still, when the girl playing the role of Bush claimed that Dukakis was soft on the...