Summary of You Are Awesome 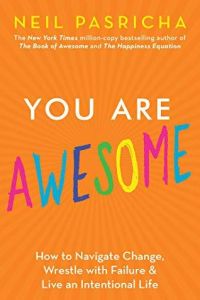 Best-selling author Neil Pasricha may seem to build a simple case for how “awesome” you are, basing his reporting on numerous research studies and expert opinions. He upends the current culture of perfection by stressing the importance of failure. He also tells you to find time to unplug from today’s constant connectivity. In his exuberant, sometimes simplistic way, he challenges you to do the work and take responsibility for your next step in life. You may think you know what lies ahead, but studies show you don’t. This book will give a boost to employees, managers and executives who want to become more resilient and to make sure they’re on the path that works for them.

Award-winning author Neil Pasricha has written six books on intentional living, two of which sold more than a million copies and spent 200 weeks on the New York Times bestselling list. He hosts the podcast 3 Books.

An ellipsis opens up possibilities.

The ellipsis was first used in a 1588 English translation of a Roman play. Adding those dots of punctuation to show a gap in a sentence can mark the transition from an absolute finality into a future option. An ellipsis also means an additional new challenge, which you may want to end with a period. Letting your process of transition continue, however, allows you to keep “fighting, working, trying.”

A daughter of East Asian parents in Kenya used this as a mantra. She studied every day, scored the highest on a National Exam and won a scholarship to a posh boarding school before her father called asking her to come home before he died. In just a short time, she found hereself in London, then married off to a man she’d met once and, ultimately, living in a Toronto suburb.  She held to the idea that she didn’t know her new culture“…yet.” Because she viewed changes as beginnings instead of endings, she could remain stronger internally.

An MIT study found that even the hint of having an opportunity or door close makes that opportunity...

There Is No Good Card for This
9
Game Changers
9