Review of Zero to One 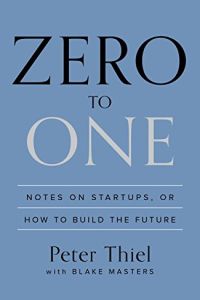 Peter Thiel, the founder and original CEO of PayPal, the first outside investor in Facebook and a partner in the venture capital Founders Fund, offers his original perspective on entrepreneurship, investing, future profits and the VC “Power Law.” His illuminating essays began as lectures for his famous class on start-ups at Stanford University. Thiel contends that doing what’s already been done takes you on a journey to nowhere – from “1 to n,” or zero. But when you make something new – a business, a product or a work of art – Thiel believes you travel from “0 to 1.”

Peter Thiel, the founder and original CEO of PayPal, was the first outside investor in Facebook and is a partner in the Founders Fund.

Peter Thiel is convinced that the strategy common wisdom regards as the smartest way to do business is, instead, the surest route to failure. To innovate, Thiel urges you to shun the usual formulaic solutions. Success comes from finding or inventing the road never taken and taking it. This is true, he says, even though creating something new in established organizations is difficult, and creating something new by yourself is even more so.

Thiel says progress takes two forms: horizontal and vertical. Horizontal progress duplicates or create iterations of something that is already successful. Globalization is practically the definition of horizontal progress: it does the same tasks in a new location. In comparison, vertical progress makes something new. Technological advances often demonstrate vertical progress. Globalization and technology can exist at the same time, Thiel notes, or dominate markets separately. The era from 1815 to 1914 experienced both. But from the end of World War I to 1971 – when Henry Kissinger’s visit opened China to trade with the West – globalization was scant, but technological progress boomed. Today, as globalization threatens to deplete the world’s resources, Thiel believes that technology has become increasingly crucial.

The Gift of Struggle
9
The Big Stretch
9
The Entrepreneurial Attitude
7
What Are Your Blind Spots?
9
Herding Tigers
8
Subscribed
8