Summary of The Future Is Faster Than You Think 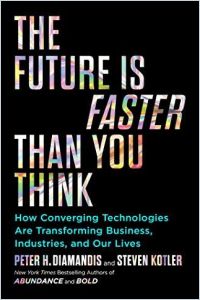 Inventor and futurist Ray Kurzweil predicts that the next 100 years will bring as much technological progress as the previous 20,000. Humanity is currently experiencing an unprecedented rate of change. That change accelerates as science-fiction tropes – flying cars, robot surgeons, even Star Trek’s immersive holodeck – become real. Peter H. Diamandis and Steven Kotler offer a tour of exciting and imminent innovations, and predict their profound effects on industry, culture, science and daily life.

Peter H. Diamandis has founded more than 15 high-tech companies. He is the CEO of XPRIZE, which aims to find crowdsourced solutions to humanity’s greatest challenges. Journalist Steven Kotler is the founder and executive director of the Flow Research Collective.

The rate of technological progress is about to shift into warp speed.

Mind-boggling gadgets and concepts, like flying cars, lab-grown steaks, quantum computers and robot surgeons, are moving from the pages of science fiction into reality. Ray Kurzweil, Google’s director of engineering, predicts that in the next century, technology will advance as much as it has in the previous 20,000 years – from the dawn of agriculture to the introduction of the internet.

In the past, technology evolved in a slow, linear fashion, and human society didn’t change drastically over the course of a few generations. But the digital technology that arose in the 20th century was different. Its evolution was exponential: It regularly doubled its capacity while lowering its costs. Gordon Moore, the founder of Intel, identified this phenomenon in 1965 when he noticed that the number of transistors on integrated circuits was doubling every 18 months. He predicted that this pattern would continue for up to 10 years. Dubbed Moore’s law, the prediction has held true for more than 40 years. The result: Computers double their power every year and a half, while their costs ...