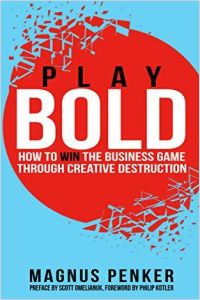 Innovation specialist Magnus Penker breaks down why seemingly successful businesses fail while others embrace radical innovation to avoid failure. Penker offers familiar advice: Don’t become complacent, embrace failure and invest in sustainability. But he also believes that listening to customers is a mistake, and that company founders make poor managers. While there is no sure-fire way to thrive in a cutthroat world, Penker offers bold leaders reassurance that survival remains possible.

Author of the book series The Complete Guide to Business Innovation Magnus Penker is the founder and CEO of the Innovation360 Group.

Everything people need in the world already exists. Innovators recombine elements to make something new.

Why are some companies more successful than others? The answer lies in how companies become successful in the first place. Companies that thrive invest in three capacities: innovation, capabilities and competencies. A competency is a measure of how well a person performs a task. A capability is the untapped potential within a company’s team. Assemble people with the right competencies into teams to create capability, which drives innovation. Create the right team with the right people who possess the right competencies. Teams must be fluid, stay ahead of the competition and keep innovating to elevate their capabilities in order to remain successful.

The “S-curve” represents a company’s lifespan. It’s born, grows, matures and then fades out. Instead of fading out, your company can leap – as your first S-curve diminishes – to the start of your next one. Extend your S-curve with incremental innovation, then make the leap with radical innovation. The former nominally increases a company’s value, but is safe until it reaches...

How to Assess and Measure Business Innovation
7