Summary of Shortcut to Prosperity 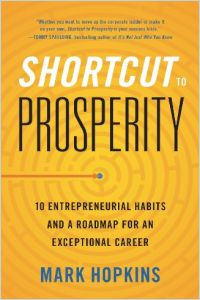 Successful manufacturer Mark Hopkins sets out to be inspiring, and he succeeds. He delivers this positive message: You can accomplish anything in life if you plan carefully and are willing to work hard. Hopkins introduces and explains 10 shortcuts to get exactly what you want. He uses stories of famous and not-so-famous people, helpful lists and widely varied examples to make his point: with a can-do attitude, diligence and ability, you can do anything. If you are trying to get yourself moving, you’ll see why getAbstract recommends Hopkins’s encouraging treatise.

In 1993, David Schenk sat in the grandstands at Alabama’s Talladega Superspeedway, watching a stock car race. The cars roared around the track at nearly 200 miles per hour. On the race’s final lap, Dale Earnhardt bumped Rusty Wallace’s car, sending it flying into the air. It flipped over and over. The crash destroyed it. Schenk, an alert hobbyist photographer, captured the dramatic moment in 12 shots with his Minolta camera.

Schenk sent copies of his photos to friends who had watched the race with him. Wallace drove for Roger Penske’s race team, and a friend forwarded a photo to the team. Shortly afterward, a Penske team member contacted Schenk to find out if he had any other photos of the accident. Based on those pictures, the Penske team altered the design of its race vehicle to make it safer.

Schenk contacted all the racing magazines that covered NASCAR and one of them, the NASCAR Winston Cup Scene, offered him a part-time photography job. For the next two NASCAR seasons, Schenk covered the racing scene for the publication. The drivers, including Earnhardt, soon came to prefer him to any other photographer.