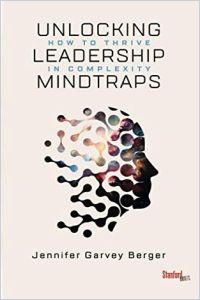 Executive Jennifer Garvey Berger synthesizes the most salient points from her two previous, well-respected reference books on adult development into one slim volume. She adds the fictitious tale of a professional power couple and their adviser to show the dangers of five common mental traps that snare leaders. Each one causes you to filter out information, opinions, data and even irrefutable facts that don’t align with your narrative, your opinion or your ego. This smart self-help book rises well above its genre in its accessible but sophisticated treatment of adult growth.

For thousands of years, instincts – which evolution honed – helped humans survive. Today, those instincts threaten your success at work and in life.

The shortcuts and instincts that allowed humans to survive a perilous but much simpler past now create traps that impair your ability to make decisions and take action in complex, fast-changing and interconnected times. Imagine your young self and a friend in the middle of a jungle, 10,000 years ago. You hear a noise that sounds like a large animal moving toward you. You run. Your friend hesitates. The sound could be a lot of things, so she pauses to contemplate the range of explanations. You live to see another day. Your friend sees the teeth and claws of a tiger.

Until recently, instincts and mental shortcuts like the ones that saved you from the tiger were so helpful that they grew stronger as humans evolved. You lived to reproduce. Your thoughtful friend didn’t. These instincts worked because for thousands of years, most lives unfolded relatively predictably. People could rely on old patterns, narratives and lessons to guide them in making daily decisions.

Changing on the Job
8
Executive Coaching
6