Summary of Corporate Crime and Punishment 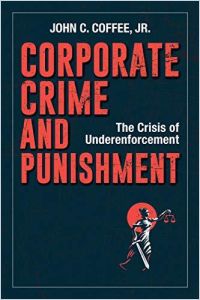 Executive white-collar criminals rarely face prosecution, much less jail. Laws are not well enforced, in part because prosecutors lack the resources for major prosecutions, reports law professor John C. Coffee Jr. Executives often sidestep liability because their companies enter deferred prosecution agreements (DPAs), in which the organization doesn’t acknowledge guilt. But crooked bosses, not their firms, should be law enforcement’s target. Coffee recommends that regulators and prosecutors should hire private law firms for research and should reward whistleblowers. His sharp, theoretical overview is detailed and practical for corporate lawyers, regulators and executives.

John C. Coffee Jr. is Adolf A. Berle Professor of Law and director of the Center on Corporate Governance at Columbia University Law School.

In the past, white-collar crime was straightforward. If a senior executive engaged in misconduct on behalf of a company, the employee and the company were guilty, and therefore liable. But in recent years, corporations typically evade responsibility for crimes their employees commit by entering into “deferred prosecution agreements” (DPAs). In such agreements, the company pays a fine, and cooperates with prosecutors in ways that might lead to employee prosecutions.

With DPAs, executives rarely face prosecution. No senior Wall Street executive faced prosecution, much less prison, after the 2008 financial implosion. The only people the courts went after were lower-level employees. Yet many people, including prosecutors, wanted to prosecute Wall Street executives. Prosecutions did occur in previous financial calamities, such as the 1980s savings bank collapse and the Enron scandal in 2001 and 2002.