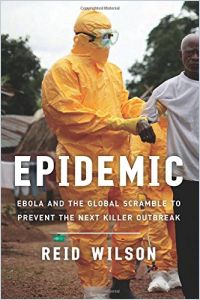 The Ebola outbreak of 2014 was a terrifying near miss. Amid reports of the ghastly deaths of thousands of West Africans, residents of first-world nations faced the frightening reality that geographic barriers like oceans and deserts offered scant protection from a pandemic: Just one sick person getting on a plane could spread the deadly tropical virus around the globe. In this gripping account, journalist Reid Wilson manages to turn a tale readers have already heard into a suspense-filled page-turner. Through in-depth interviews with American public health officials, Wilson provides riveting new details and a compelling analysis of the outbreak. He also addresses the scientific nuances of immunology with aplomb, providing straightforward, easy-to-understand explanations. getAbstract recommends this book to readers who’d like to understand just how close major metropolises like Dallas, Texas, were to becoming Ebola hot zones. Only sheer luck allowed public health officials to confine the Ebola epidemic to three West African nations, and only concerted effort will keep the next outbreak contained.

Reid Wilson is a national correspondent for The Hill newspaper in Washington, DC. He covers politics, public policy, campaigns and elections.

The Ebola virus, first discovered in 1976 near the Congo River in Africa, is one of the deadliest germs ever seen. In most outbreaks, Ebola kills 90% of the people it infects. As the virus replicates in human victims, it causes high fever, vomiting, diarrhea and oozing discharges from the eyes and nose. Ebola needs just the smallest of entry points to spread to a new victim: It can penetrate mucous membranes and small scrapes on the skin.

In the decades after the virus was discovered, Ebola outbreaks were confined to remote parts of the Democratic Republic of Congo, Sudan, Gabon and Uganda. Victims tended to die so quickly, they didn’t have time to travel far enough to spread the disease to new locales. Thus, once the disease had claimed all the denizens of a small village, it had nowhere else to go, and the outbreak fizzled out. Immunologists were left to imagine what might happen if Ebola arrived in a large city – and to feel fortunate that the disease had remained a rural scourge rather than an urban blight. Meanwhile, public fear of the disease was sparked, briefly, by the 1994 bestseller The Hot Zone, ...

Epidemics and Society
9
Alien Thinking
9
Together
9