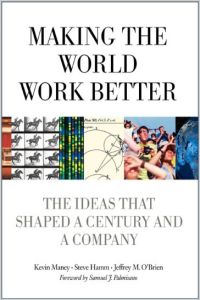 Most corporate biographies read like carefully crafted public relations pieces, containing the self-congratulatory prose found in any annual report. In a refreshing departure, journalists Kevin Maney, Steve Hamm and Jeffrey M. O’Brien offer a thoughtful, well-researched and intelligent history of IBM. In telling IBM’s story, the authors trace the history of technology over the last century, explore IBM’s influence and how it changed industry and society. They delve into IBM’s story from its founding father Thomas Watson Sr. and its participation in technology development, to today’s modern international corporation. Even though IBM sponsored and published its own epic tale, getAbstract recommends it to anyone interested in computer technology or business history.

Kevin Maney reported for USA Today for two decades and is the author of The Maverick and His Machine. Steve Hamm wrote for BusinessWeek for 20 years before joining IBM’s Corporate Communications. Editor and journalist Jeffrey M. O’Brien worked at Fortune and Wired.

The Birth of IBM

In the 1960s, IBM launched the Selectric electric typewriters. The Selectric provided IBM computer scientist Bob Berner with a prototype for a computer keyboard. Berner worked on a universal alphabetic code that any computer could understand. The American Standard Code for Information Interchange (ASCII) remains the defining alphabet for computers today. By adding extra buttons, such as the Esc and backslash keys, Berner modified the Selectric keyboard for computers. The keyboard, and Douglas...

The End of Scale
8

The Maverick and His Machine
8