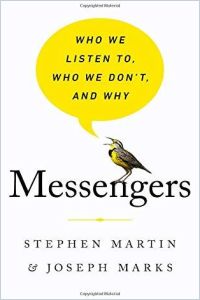 Behavioral scientist Stephen Martin and researcher Joseph Marks synthesize an enormous volume of information on how messengers influence the messages you hear and the attention you pay to them. They present their material on the effects of hard and soft messengers, complete with compelling examples that explore decades of research. While the authors could present a more definitive path out of the dilemma they describe, they always relate their discussion to social issues. Their understanding of messengers will help communicators and audiences decode the information age.

Stephen Martin, CEO of Influence at Work UK, teaches behavioral science at the Columbia University Graduate School of Business. Joseph Marks is a researcher at University College London and the Massachusetts Institute of Technology.

Audiences react to eight “messenger cues” when deciding whether to accept the person delivering a message and the message itself.

Audience members draw conclusions about a messenger and his or her trustworthiness from eight messenger cues.

1. Messengers’ socioeconomic position gives them perceived status and affects their ability to connect with audiences.

Socioeconomic status – fame, wealth or position – gives messengers greater credibility because people believe that society rewards hard work. Audiences think that people with high status have traits that contributed to their success and that might be useful to their listeners. Thus, audiences assume that messages from high-status individuals are worth their attention.

Like celebrities who tire of the public eye, people who gain status due to wealth or other factors tend to be less eager to engage with the public. When people have status, public contact ...