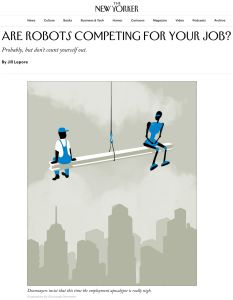 Are Robots Competing for Your Job?

Probably, but don’t count yourself out.

Advancing technology has historically created new kinds of jobs, making workplaces less labor-intensive as automated machines perform tasks more efficiently. That era could be ending, as AI robots become decision makers, consuming white-collar as well as blue-collar jobs. Corporations are heavily investing in smart machines over humans, and outsourcing jobs to lower-paid workers overseas. A major job loss tsunami looms on the horizon, leaving millions of American workers marginalized or out of work. Some economists disagree with these familiar cries of “robot apocalypse,” but one question is worth considering: Could a machine do your job? The article will engage and perhaps alarm anyone concerned with the future of work.

AI machines and online immigrants are stealing American jobs at an alarming rate.

One study predicts that about half of American jobs could be performed by AI within 20 years. Economics Professor Richard Baldwin says that America also leaks significant numbers of jobs through global employment websites. He suggests that as humanity itself becomes marginalized in the workplace, people should avoid competing with AI, and instead hone skills that only humans can do.

Baldwin thinks society will eventually divide into three groups: high-income elites, people who provide elite services, and the unemployed. This last group may become a “useless class,” with...

Jill Lepore is a staff writer at The New Yorker and a professor of history at Harvard University. Her latest book is These Truths: A History of the United States. 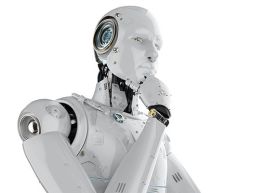