Summary of Beyond NATO 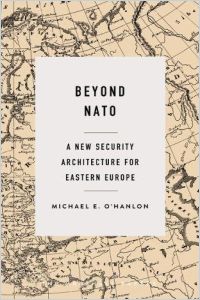 To Western tastes, Russian president Vladimir Putin is an incorrigible autocrat who punishes dissenters at home, bullies his neighbors and takes pleasure in such political espionage as meddling in the United States’ presidential election. But to Russians, Putin is a tough-minded politician standing up against the threatening expansion of the North Atlantic Treaty Organization (NATO). In this slim volume, written prior to the impact of Donald Trump’s presidency, Brookings Institution expert Michael O’Hanlon lays out these competing viewpoints. Putin is right to feel nervous about NATO’s expansion, O’Hanlon argues in this contrarian essay. Rather than further crowding Russia, he argues, NATO should take a breather and cease expansion. O’Hanlon serves up intriguing background information, such as that Putin repeatedly warned US president George W. Bush that Iraqi leader Saddam Hussein had lied about possessing weapons of mass destruction. When Bush invaded Iraq anyway, Putin decided America was dangerously eager to build its own empire. In this well-informed overview, O’Hanlon doesn’t ignore Russia’s belligerence. getAbstract recommends it for useful insight into the Russian psyche.

A dozen nations – the United States, the United Kingdom and France, most notably – formed the North Atlantic Treaty Organization (NATO) in 1949. It now comprises 29 member countries. The alliance provided security during the Cold War and after the September 11, 2001, terrorist attacks. NATO succeeded in defusing tensions between member states, such as Greece and Turkey. However, its expansion has become a point of contention in Moscow. Russia objects to NATO pushing closer to its borders.

The Czech Republic, Hungary and Poland joined NATO in 1999. Bulgaria, Estonia, Latvia and other former Soviet clients entered in 2004. NATO invited Georgia and Ukraine to join in 2008, but they have yet to act, so they don’t fall under NATO’s protection. Russian president Vladimir Putin dislikes NATO and seeks to undermine the strength and stability of Georgia and Ukraine, which he sees aligning with enemy forces.

From a Western point of view, NATO is a benign organization that seeks collegial and collaborative relations with Russia. Its members view the alliance’s mission...

Ukraine and the Art of Strategy
7
GIS Dossier: NATO’s strategic dilemmas
6
The Shoals of Ukraine
9
Russian “Hybrid Warfare”
7
Forecasting Russia
9
Russia as It Is
8