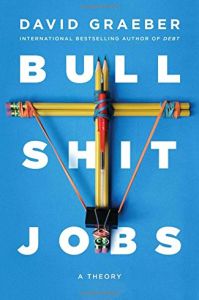 David Graeber’s bestseller stems from a popular, brave and subversive article he wrote in 2013. He acknowledges in the final sentences of the book that he is presenting his controversial argument to provoke thought, not to propose solutions. The first four chapters offer amusing anecdotes about stupid jobs, but the most thought-provoking material appears in chapters five through seven. Graeber’s insights may make you consider whether politicians, the wealthy – and even you – collude to keep yourself and many other employees trapped in a life of limited freedom dominated by the frustrations of meaningless work. While always politically neutral, getAbstract suggests Graeber’s treatise to those who question the basic elements of life and work that most folks take for granted. (Warning, as you might surmise, expect some profanity.)

What Happened to Utopia?

Pointless, meaningless and, in many cases, harmful jobs constitute more than half of all work performed in Western countries today. If companies eliminated worthless work and automated work that machines could do, people would work only a few hours a day.

Why do most people still work 40 or more hours each week with only a small amount of vacation time each year? Consider what they might do with their free time. Might they question events around them? Might a leisure-based economy upset the current economy in which only the top one percent gets ahead? Might ruling politicians and the very wealthy have orchestrated the current fake economy to keep citizens occupied with work so they have little time for anything else?

Empty jobs are any positions in which the workers believe their labor has no meaning, helps no one, and contributes nothing to society, or they’re jobs that workers know existing technology could easily do. This is especially true if no one would suffer if the worker didn’t do the job. ...

David Graeber is an anthropology professor at the London School of Economics. He formerly taught at Yale University.

On the Phenomenon of Bullshit Jobs
8