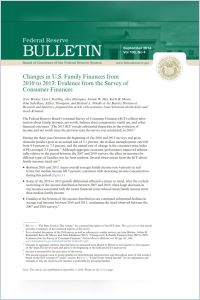 The Federal Reserve surveys US households on their finances and credit conditions every three years to gauge Americans’ economic health. Plowing through the morass of analytics, charts and tables in this latest edition, released in late 2014, is not easy, but it is revealing: Years after the financial crisis, the top of the heap is gaining, the bottom of the pile is losing and those in the vast middle are going nowhere. getAbstract suggests this statistics-laden report to analysts and policy makers who are intrigued by the troubling income and wealth accumulation trends it uncovers.

The authors work in the division of research and statistics at the Federal Reserve Board.

Despite an improving economy in the United States from 2010 to 2013 – when GDP grew 2.1% and unemployment declined from 9.9% to 7.5% – income and wealth disparities among US households widened, according to the latest triennial Survey of Consumer Finances (SCF). The previous SCF – for 2007 to 2010 – showed a narrowing of differences among income groups, but by 2013 income concentration at the top coincided with falling incomes farther down the scale. Income decreases for the bottom 90% benefited the top 3% in 2013.

Examining the Black-White Wealth Gap
7
Global Inequality
9
The Rich Cut Their Spending. That Has Hurt All the Workers Who Count on It.
7
Financial Institutions Can Help Break the Cycle of Racial Inequality
9
Data Analytics and Improving Investor Behavior
9
The Long Good Buy
8