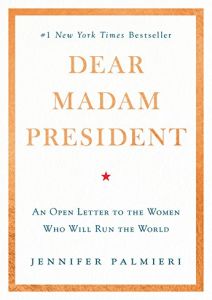 An Open Letter to the Women Who Will Run the World

Political insider Jennifer Palmieri offers a moving tribute to leaders she’s learned from and admired in this poignant insider memoir of Hillary Clinton’s 2016 presidential campaign. Palmieri writes in the form of an open letter offering advice to the first woman who becomes president of the United States in the future, whoever she may be. Palmieri was Clinton’s communications director and had a front row seat to the unique craziness of the 2016 election season. She draws her eclectic – and, fair warning, partisan – memories around processing her sense of loss and considering what it means to survive and thrive in politics as a woman.

“When the unimaginable happens, imagine what else may be possible.”

Jennifer Palmieri felt devastated the day after the November 2016 presidential election. It wasn’t just losing, and it wasn’t coming to a stop after months of continuous movement. Palmieri had to deal with her sister, Dana, who lay sick and dying in Houston.

Palmieri had joined Hillary Clinton’s presidential election campaign after being part of the White House communications team for President Bill Clinton and President Barack Obama. Post-election, she took a break from politics. She felt let down by the rules she and other women had always played by. Today, women play by their own rules and win.

“Brace yourself: Nothing draws fire like a woman moving forward.”

Palmieri disliked people lauding Clinton as a “gracious loser,” rather than as a woman ambitious enough to run for president. Palmieri had thought Americans could elect a woman, especially one so qualified. Clinton tried to warn her.

The women’s movement is relatively young. Clinton’s mother was born the day Congress gave women the right to vote. Misogyny was the biggest obstacle to Clinton’s election...