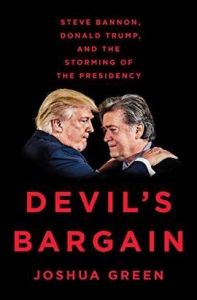 Steve Bannon, Donald Trump, and the Storming of the Presidency

Joshua Green is the rare mainstream journalist who understands the nationalism and populism that Donald Trump harnessed to win the 2016 election. Here, Green chronicles Steve Bannon’s role at Breitbart News and in Trump’s campaign, offering one of the best explanations yet of the white working-class support that sent Trump to the White House. As Green retells the debates and speeches of the 2015 and 2016 campaign, he provides behind-the-scenes details about Trump’s tantrums and Bannon’s button pushing. Green is no apologist for Trump’s rhetoric, which he sees as racist and factually challenged, but he offers a straightforward account of how Bannon tapped into right-wing rage to guide Trump’s victory. Green describes Trump’s surprising popularity among minority television audiences due to The Apprentice – popularity that plummeted after Trump embraced the “birther” campaign attacking President Barrack Obama. Green also reports on Bannon bankrolling investigators to dig up unflattering stories about Hillary Clinton. Green’s report is a useful, readable guide to the racial and political undercurrents that traditional journalists and politicians often overlook.

Steve Bannon, then executive chairman of Breitbart News, was a political provocateur who advocated right-wing themes. A far-right website, Breitbart specialized in racially tinged, hard-line commentary.  Donald Trump seized on these ideas as his political star rose in 2016.

Both Trump and Bannon despised Hillary Clinton. Bannon referred to her as, among other things, an “apple polisher” and a “bull dyke.” Mainstream Democrats and Republicans regarded Trump’s candidacy as a joke – a publicity stunt and a salve to Trump’s mammoth ego. Bannon viewed Trump as the epitome of the nationalist populism he had been pushing for years.

Political history is full of behind-the-scenes men, like Machiavelli or Karl Rove, who pull strings and become the hidden powers behind the throne. Bannon served this role for Trump, whom he saw as “a vessel for his populist-nationalist ideas.” Bannon backed Sarah Palin, then Michele Bachmann, and while both boasted Tea Party bona fides, neither had Trump’s broad appeal. At first, Bannon found Trump underwhelming. He cared little for policy and didn’t read Breitbart...

Joshua Green, senior national correspondent for Bloomberg Businessweek, was senior editor at The Atlantic and columnist for The Boston Globe.

The Authentic Appeal of the Lying Demagogue
8