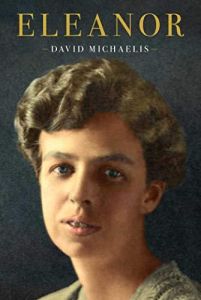 Eleanor Roosevelt led a life of public service and private struggle, a testimony to the power of purpose and perseverance. The niece of US president Theodore Roosevelt, she was orphaned at an early age, then studied abroad before marrying her fifth cousin, future US president Franklin Delano Roosevelt. He was unfaithful to her, and she sought love from others, but their personal and political partnership endured. As first lady, Eleanor condemned racial discrimination and other social injustices. She went on to guide the United Nations toward its adoption of the Universal Declaration of Human Rights.

Eleanor Roosevelt was an orphan from an affluent family. Her relatives nicknamed her “Granny” because she was such a serious child.

Eleanor Roosevelt was born in New York City on October 11, 1884. By then, the marriage of her parents Elliott Roosevelt and Anna Hall Roosevelt was unraveling. Her father was the elder brother of Theodore Roosevelt, Eleanor’s “Uncle Ted,” the 26th US president. The Roosevelts lived in New York and shared a family fortune.

Eleanor was an unusually serious girl with a grave manner, which her mother repeatedly mocked, frequently “in front of company.” Eleanor was happy when she was near her beloved father, and did more than her mother to help him cope with his alcoholism. In 1891, Elliott’s drunken binges led his sister, Bamie, to initiate steps to declare him legally insane, drawing embarrassing newspaper coverage. Eleanor lost contact with her father as her mother threatened divorce and demanded a trial separation. Eleanor blamed Anna for her father’s exile. When she died of diphtheria in 1892, Eleanor, age 8, “shed no tears.” Left with her maternal grandmother, she hoped for more...

David Michaelis is the best-selling author of Schulz and Peanuts and N.C. Wyeth, which won the Ambassador Book Award for biography.