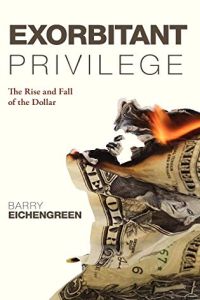 Professor Barry Eichengreen’s exploration of the dollar’s reserve currency role could be merely an interesting history of currencies and repositories of value – from wampum and whelk shells to credit default swaps – all mapped out from Bretton Woods to the Maastricht Treaty to China’s looming role and beyond. But Eichengreen accounts for more than history as he expertly guides readers through the maze of the international monetary system. getAbstract finds that unresolved issues in world markets give this exposition considerable contemporary bite. Eichengreen argues solidly that the threats to the dollar’s international reserve status are real enough, but says all signs are that the dollar will endure as the first among rivals, even if other regional kingpins arise. He seems to believe that, despite its various crises and challenges, the dollar will remain dominant – but, in the end, he ducks a definitive judgment and concludes that its fate is in American hands and not in those of the Chinese or other international competitors.

Barry Eichengreen is a professor of economics and political science at the University of California, Berkeley, and the author of Financial Crises and What To Do About Them and The European Economy Since 1945.

In a scene in The Counterfeiters, a German film set just after World War II, the main character turns up at a casino with a suitcase of money. It contains neither French francs nor German marks, but dollars. Move forward 50 years to the thriller City of Ghosts, which features another hero carrying a ransom payoff in a suitcase. The scene is set in Cambodia, but the money is not in Chinese renminbi; once again, the suitcase is full of dollars. This neatly illustrates how enduring the dollar has been as the international reserve currency, not just in demand by Somali pirates and kidnappers everywhere, but also foremost in the hearts of the world’s respectable financial leaders. So far at least, the 2008 financial crisis has not dented the dollar’s status, though it tainted many US financial assets.

Many Americans may take the dollar’s international role and importance for granted, not realizing that serving as the world’s reserve currency is an “exorbitant privilege.” Former French President Valery Giscard d’Estaing coined the phrase as finance minister when he became all too aware of the economic advantage this status gives the US.