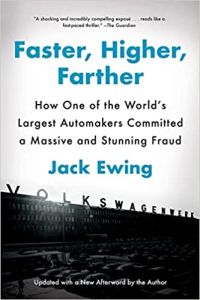 The review below was first published in the getAbstract Journal on Feb 2, 2022.
We’ve reviewed this title for you as we currently cannot offer a summary.

Jack Ewing presents a surprisingly suspenseful, shocking tale of Volkswagen’s maleficence, how they were caught and the consequences they face.

New York Times journalist Jack Ewing has worked in Germany since 1994, and he demonstrates how well he understands German culture in this unlikely thriller. He details how Volkswagen marketed its diesel cars as green enough to rival electric cars in low emissions. That was a fraud. Although Volkswagen overtook Toyota as the global leader in car sales, VW’s illegal “defeat device” and the company’s attempts to cover it up cost VW about $15 billion in the United States alone. Potentially VW could face $50 billion losses worldwide.