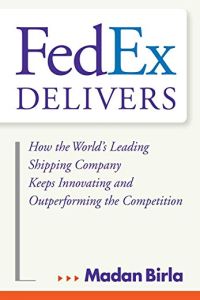 Author Madan Birla spent 22 years with FedEx, watching its culture of innovation develop as it applied new ideas in the marketplace. Birla’s fluid writing style and his first-hand observations and insights make this an exceptional corporate story. He knows the people who built FedEx at all levels, from delivery drivers to CEO Frederick Smith. Birla focuses his book on how FedEx became a leading innovator and reshaped the global airfreight business. While many corporations give lip service to innovation and employee development, Birla says FedEx delivers the real thing, and he provides rare specifics as he shows companies in other industries how they can replicate FedEx’s successes. getAbstract.com recommends this book for executives at all levels in large and small businesses. If you absolutely, positively must learn to innovate, this book delivers.

Madan Birla, now a corporate consultant, was with FedEx for 22 years. He was a member of the company’s long-range planning committee where he worked closely with CEO Fred Smith.

When Federal Express opened for business on April 17, 1973, a small group of employees sorted 186 packages for delivery the next day in 25 U.S. cities. That made FedEx the first company to specialize in overnight deliveries. By 2005, FedEx processed five million packages daily and provided delivery in 215 countries.

FedEx established some records along the way to this pattern of growth and success. It was the first company to hit $1 billion in its first 10 years of existence (based on internal growth without acquisitions). From 1979 to 2001, the company built its airplane delivery fleet from 60 to 600 planes, and increased revenues from $400 million to $22 billion.

In its early days, FedEx benefited from a lack of competition. The company’s early competitors were passenger airlines, which also carried packages but could not guarantee timely delivery. Commercial airlines planned their flights around the best times for passengers, not packages, and often had delays. This meant packages arrived at their destinations based on passenger flight schedules. Airline companies did not provide pick-ups or deliveries, so senders had to rely on third...