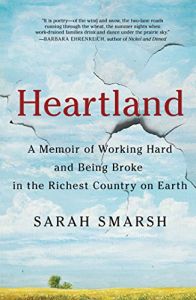 Sarah Smarsh
Scribner, 2018 more...
From HEARTLAND: A Memoir of Working Hard and Being Broke in the Richest Country on Earth by Sarah Smarsh. Copyright © 2018 by Sarah Smarsh. Reprinted by permission of Scribner, a Division of Simon & Schuster, Inc. y
ISBN: 9781501133091
Pages: 304
Buy book or audiobook

“You got what you worked for, we believed. There was some truth to that. But it was not the whole truth.” So says Sarah Smarsh, who grew up in a family of working poor people in Wichita and rural Kansas in a country known for affluence and opportunity. In this beautifully crafted, timely and stirring memoir of living below the poverty line, Smarsh explores the cultural forces driving America’s socioeconomics, drawing from her experiences and those of her extended family. Hers is a candid look at the myth of the American Dream, the hard facts of economic inequality and society’s disdain for the poor.

Sarah Smarsh’s mom, Jeannie, was 18 when she gave birth to Sarah in the summer of 1980 in rural Kansas. Her mother Betty had been a teen when Jeannie was born as well. Sarah joined the fifth generation of Kansas farmers on her father’s side. She entered the world as a poor white female in a country that doesn’t acknowledge class disparity. Sarah began to understand her place in the socioeconomic order when she left home at age 18, and she didn’t hear the term “white working class” until well into adulthood.

Faith in the American Dream perpetuates the belief that people can improve their station with ingenuity and hard work. The working poor, however, can spend a lifetime in labor and end up further behind. Sarah’s family wasn’t starving or homeless but, at times, they couldn’t afford new shoes or doctors.

Sarah came into this world just as people were losing faith that the US economy would continually improve and were realizing that the world’s natural resources weren’t limitless. Reagan’s presidency ushered in trickle-down economics, renewed states’ rights and deregulation. Yet money...

The Source of Self-Regard
9