Summary of How Come Every Time I Get Stabbed in the Back My Fingerprints Are On the Knife? 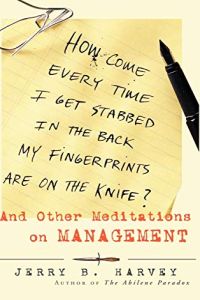 Jerry B. Harvey, a professor of management science, offers a series of essays on various management topics, such as backstabbing, betrayal, deception and work environments. To make his points, he uses a kind of discursive, reflective approach that includes a mix of stories, fables, metaphors and considerations of language usage. Some might find his approach a refreshing narrative, complete with the feel of discovery you’d get from reading someone’s diary. Others may find that the essays ramble and repeat themselves. getAbstract agrees more with the first line of thinking. However, we do post the cautionary note that – although Harvey raises some generally unmentioned, intriguing issues in the politics of management – he does need to be more concise. In other words, perhaps he could have used that knife in his back to trim his prose a little.

Jerry B. Harvey is a professor of management science at George Washington University. He is the author of The Abilene Paradox and Other Meditations on Management He has been a consultant for business, government, various health care services and the nonprofit sector and has published many articles concerning organizational behavior and education.

Jerry B. Harvey became aware of the need to challenge assumptions and ask questions one day when he was walking on the beach. He saw a heavy, bald-headed man in a bathing suit digging a huge hole in the sand with a plastic bucket. Nearby was a fat, male Labrador retriever, who was digging an equally big hole with his front paws. First the man would dig and then, while he rested, the dog would dig. After seeing this go on for about 10 minutes, Harvey asked the man if he and his dog were digging for anything in particular. The man then replied, "It’s not my dog." When Harvey told his wife about this "absurd" experience, she agreed that it was absurd for him to expect the man to know what motivates someone else’s dog. As Harvey found, you sometimes must relinquish expectations and assumptions.