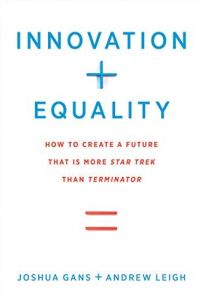 Today’s world is more technologically advanced than ever, but remains vastly unequal. Many workers lose jobs to automation and start-ups struggle as successful large firms enjoy record-high returns. Joshua Gans, chair of an innovation and entrepreneurship program at the Rotman School at the University of Toronto, teams up with politician and former economics professor Andrew Leigh to explore how innovation shapes inequality – and how to create a better future. Drawing from economics, entrepreneurship and technology, their argument boils down to one idea: You don’t need inequality to innovate.

In the United States, the 300,000 richest Americans hold the same amount of wealth as 270 million of the poorest Americans. The average worker at a large firm would have to work 312 years to make what the company’s CEO makes in one year. While the lowest-earning US households saw a 0.6% raise each year between 1980 and 2014, the top 1% enjoyed a 3% increase, with an expanding pool of billionaires reaping even more.

For those in the tech and medical sectors, the world may feel like Star Trek, where technology aids much of mankind. Those without skills, assets or employment may experience something more akin to the dystopian Terminator, where artificial intelligence decides it doesn’t need humans anymore. Machines threaten to displace human workers with the rise of innovations like Amazon Prime, fully automated factories, and Pepper, the order-taking robot at Pizza Hut restaurants in Japan and Singapore. Regardless of common attitudes in business and government, several policy changes could spark innovation without...

Joshua Gans is a professor and chair of an innovation and entrepreneurship program at the University of Toronto’s Rotman School. Andrew Leigh is an Australian politician and former economics professor.

To Disrupt or Not to Disrupt?
8

A World Without Work
9

The Power of Creative Destruction
8 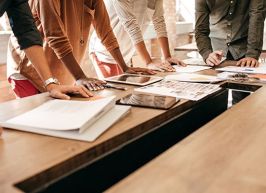 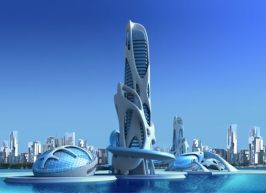