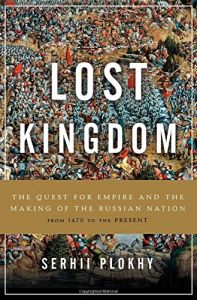 The Quest for Empire and the Making of the Russian Nation

After Russian president Vladimir Putin ordered the annexation of Crimea and invasion of eastern Ukraine in 2014, he observed, “It seems to me that the Russian and Ukrainian peoples are practically one people.” Are they? For more than 500 years, Russian leaders have laid claim to the lands of an ancient realm called Kyivan Rus’ – today’s Ukraine and Belarus – on the basis of ancient right and shared identity. Historian Serhii Plokhy, director of Harvard’s Ukrainian Research Institute, probes the complex history of this region – dissecting Russia’s centuries-long manipulation of Ukrainian nationality and selfhood. This sweeping, erudite study provides crucial context to pivotal conflicts of the 21st century; however, Plokhy doesn’t offer a comprehensive history of the region: He passes over the Great Famine of 1933, for example, in half a sentence. For a more comprehensive outline of the region’s history, pair this text with Orest Subtelny’s Ukraine: A History or Plokhy’s own Gates of Europe. getAbstract recommends Plokhy’s engaging, expert account to anyone interested in understanding the present and future stakes of Russia’s concept of nationhood.

Russia’s history as an independent state began in the 1470s, when Grand Prince Ivan III – the first tsar – threw off Mongol rule and claimed sovereignty over “All Rus’.” Though​​ Muscovy – the area Ivan ruled from Moscow – was just a small provinciality in 1238, when the Mongols first invaded, it became a locus of power during the 14th century. Ivan’s reclamation of Rus’ from the Mongols relied not only on his military prowess but also on his association with an ancient Viking dynasty, the Rurikids, who for centuries controlled a realm called Kyivan Rus’. Kyivan Rus’ had extended from the Black Sea north to Ladoga and from Brest in the west as far east as Murom: across the region that later became Belarus and Ukraine, western Russia, and eastern Estonia, Latvia and Lithuania. As Ivan moved to conquer more of the territory that had formed Kyivan Rus’, including the wealthy, democratic Republic of Novgorod, he argued that the conquered owed him their allegiance on the basis of this “old tradition.”

Serhii Plokhy is the Mykhailo Hrushevsky Professor of Ukrainian History and director of the Ukrainian Research Institute at Harvard University. Plokhy’s numerous books on Russian and Ukrainian history include the award-winning The Last Empire: The Final Days of the Soviet Union.