Summary of Money and Soccer 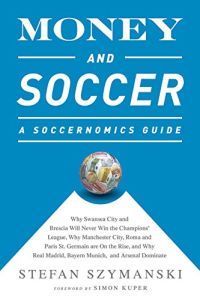 Each year, the same soccer teams win their league championships, and many soccer clubs operate in the red. Fans fret about the future of their beloved sport. How can soccer survive if most teams can’t pay their bills and never win? Sports economist Stefan Szymanski argues that soccer has a brilliant future. An amateur sports historian, he has assembled and analyzed business data on professional soccer since the 1980s. He examines the business of soccer and discusses how the fiscal realities affect the clubs, the players, the owners, the stadiums and everything else. He also details how 19th-century Britain shaped modern-day soccer. His bottom-line message is that soccer is in great shape today, and will be in better shape in the future. getAbstract recommends Szymanski’s in-depth analysis to soccer fans around the globe, and to anyone interested in how professional sports make and lose money.

Co-author of the bestseller Soccernomics, Stefan Szymanski is the Stephen J. Galetti professor of sport management at the University of Michigan.

When the global economic catastrophe decimated financial markets in 2008 – Europe’s most serious economic crisis since World War II – many thought the recession would cripple professional soccer. According to Michel Platini, president of the Union of European Football Associations (UEFA), half of Europe’s professional soccer teams experienced financial problems of some kind. He believed a prolonged crisis would drive even the top clubs to close.

Even though many sports industry experts who follow soccer agreed, professional soccer clubs seldom die, and not one went under during or after the global recession. However, some smaller clubs temporarily went out of business, including UD Salamanca, Lorca Deportiva and CD Badajoz in Spain; HFC Haarlem, SC Veendam, AGOVV and RBC Roosendaal in the Netherlands; Beerschot in Belgium; Gretna in Scotland; FC Arsenal Kyiv in Ukraine; and Unirea Urziceni in Romania. Almost immediately, though, many of these clubs started up again under different auspices. Some soccer clubs may spend some time groping for survival, but they almost always survive and continue to compete.