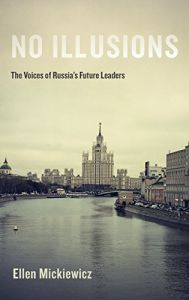 The Voices of Russia's Future Leaders, with a New Introduction

To observers outside Russia, it’s easy to imagine Russians blindly believing every one of Russian president Vladimir Putin’s provocative claims. That myth is far from reality, reports Ellen Mickiewicz, a Russia expert at Duke University. For this study, she convened focus groups of 108 ambitious, highly educated young Russians and asked them their thoughts. Their astute analysis doesn’t match the Western stereotypes. These future leaders are predictably fearful of the United States, but they also express deep distrust of their own regime. Tellingly, a significant share of the Russians in Mickiewicz’s focus groups say they don’t feel compelled to vote. The focus group discussions form the basis of this book, and Mickiewicz works in some of Russia’s recent history. The first edition of No Illusions was published in 2014, well before Moscow’s alleged meddling in the 2016 US presidential election. Mickiewicz has updated the book with a new introduction that addresses the resurgent antagonism between Moscow and Washington, DC. getAbstract recommends this study to anyone seeking thoughtful insight into Russian society.

The Puppet Master? Perhaps Not

In the Western view of Russia, Russian president Vladimir Putin’s regime is growing more belligerent. Based on its invasion of Crimea, its involvement in Syria, and more, Moscow projects an increasingly muscular image. While Russia hasn’t engaged in physical conflict with the West, Putin has started a propaganda war, one that saw Moscow seek the defeat of Hillary Clinton in the 2016 US presidential election. However, it’s clear that Putin’s propaganda wars are less successful than the West gives him credit for. Putin’s stratospheric favorability ratings, for instance, are surely inflated. Putin’s precise favorability rating is a mystery, but he’s not the hero at home that many US news outlets purport.

The effectiveness of Russia’s domestic propaganda is another area for which Moscow wins too much credit in the West. True, Putin seeks to control what the Russian people see and read in Russian media. He’s a frequent critic of the West, which he considers synonymous with the United States and its meddlesome policies. But there’s little evidence that Russians believe their state-sanctioned