Review of No One Is Too Small to Make a Difference 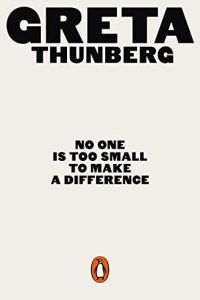 In 2018, Swedish teenager Greta Thunberg sparked a worldwide school strike to draw attention to the urgency of the climate change crisis. In her collected speeches, Thunberg lays out the impetus for her activism and explains what she hopes it will accomplish. Her book is short, and she wisely skips the well-known litany of climate change talking points to drill down on urgency. Thunberg’s mighty call to action will appeal to environmentalists, teens and political believers. Will her passion convert the unconverted? Thunberg’s young enough to hope so.

Greta Thunberg is a Swedish teenager and climate activist. She started the school strike movement to bring awareness to the climate crisis. This is a collection of her speeches in 2018 and 2019.

Greta Thunberg, a student and an environmental activist, agrees with her critics that she’s too young to lead a movement.

In a speech called Our Lives Are In Your Hands that she gave in Stockholm on September 8, 2018, student activist Greta Thunberg called the world’s attention to a report from Swedish climatologist Johan Rockström and other experts. They warned that the world’s nations had only a three-year window of opportunity to meet the goals of the Paris Agreement to halt emissions of the greenhouse gases that cause global warming.

As of September 2018, governments were not combating the crisis, and emissions were increasing. Thunberg believes that if more people realized the consequences of greenhouse gas emissions, they’d be as alarmed as she is. Thunberg acknowledges that she’s too young, being in her mid-teens, to be an activist leader. But, she says, children see no one else leading a response to climate change, so they must speak out. Thunberg’s speech-making voice is strident and, at times, justifiably angry. Social niceties do not guide her. “You are not mature enough to tell it like it is,” Thunberg chastised government leaders in Stockholm. “Even that burden you leave to your children.”