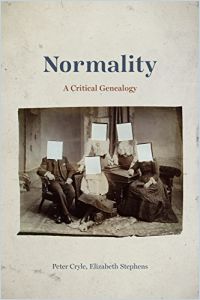 Have you wondered where the idea of the normal comes from? Consider these sources: Italians measuring criminals’ skulls, 19th-century French arguments about how medicine works and how much math should be involved, and statues depicting average Americans. They all helped shape what people see as normal. To show how “normal” has changed over time, transformed by rhetoric and contesting disciplines, Peter Cryle and Elizabeth Stephens explore the disciplines that shaped what’s normal and explain its implications. Anyone interested in cultural and social norms and in how people understand themselves will appreciate this book.

Peter Cryle is an emeritus professor at the University of Queensland’s Institute for Advanced Studies in the Humanities, where Elizabeth Stephens is an Australian Research Council Future Fellow.

The idea of the “normal” is recent and contested; even the word has had various meanings.

People use the term “normal” often. However, the term is relatively new, and has had distinct and contested meanings associated with defining pathology, and with developing social hierarchies of race, gender, sexual orientation, and sexual practice. Constructing a critical genealogy of the term is essential to understanding how the word “normal” functions today.

The contemporary concept of “normality” started in the 19th century, and it takes multiple forms. The philosophical ideal of the norm serves as a rule that guides actions. It was used in physics books as a synonym for the geometrical concept of perpendicularity as late as 1822. From there it moved into education, with the idea of the normal school. In the 1820s, the word arose in medical discourse.

In the 1830s, medicine and statistics intersected to shape the normal.

Some medical experts opposed using the numerical method in medicine because they saw the idea of average as oversimplifying the level of knowledge a doctor needs. Belgian Adolphe Quetelet, a major...

Finding a New Purpose for Old Drugs
7
How Does COVID Affect Mother and Baby?
10

The Covid Files 2: How Are You Feeling?
8
WMO Statement on the State of the Global Climate in 2019
9