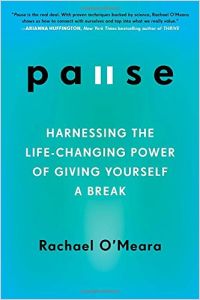 Executive coach Rachael O’Meara calls any break a “pause,” whether it’s a 30-second breathing exercise, a few vacation days, or a multiyear exploration of your inner self or the world around you. She covers important territory and refers to scientific evidence to demonstrate that a pause really does refresh. O’Meara’s pithy insights and advice will give a boost to anyone new to – or in serious need of – taking a break from an otherwise hectic daily life.

Transformation leadership and executive coach Rachael O’Meara almost lost her job at Google before she realized she needed a break. Since then, she’s been thinking, writing and speaking about pauses while continuing as a sales executive at Google.

A “pause” can be a 30-second breathing break, a two-year exploration of the planet or any sojourn in between.

Rachael O’Meara enjoyed success in her life and at work before she became a customer support team manager at Google, when she “hit a wall” and floundered. Poor performance reviews – one after the other – led to an ultimatum from her boss: Join a performance improvement program – and likely lose her job anyway – or take on a different assignment at Google.

O’Meara checked her savings account and thought of a third option – a pause. She asked for a 90-day, unpaid leave of absence, stipulating that she would give up her current job, move her replacement through the transition stage and take a new assignment on her return. Her boss agreed, and O’Meara’s adventure began. She took what she calls an “extended pause,” ultimately staying away 60 days, before returning to Google.

One way to take a pause is by meditating: Take a deep breath. As you inhale, say, “I am present.” As you exhale, say, “I listen to my inner voice to truly know what’s best for me.” Do this for 30 seconds while listening to your body and your emotions. Then spend three to five minutes recording...