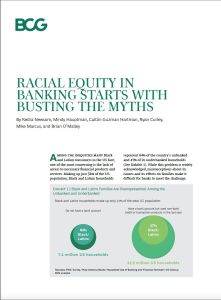 Racial Equity in Banking Starts with Busting the Myths

In this timely and informative report, professionals at the Boston Consulting Group describe the reasons for the glaring racial disparities in access to conventional banking services. The authors point out that, due to financial firms’ role in capital provision, they can address racial inequality by, among other roles, refocusing their efforts on business development and financial advice in communities of color. This cogent analysis carries important insights for financial professionals.

Assumptions about the unbanked and underbanked in America are flawed.

Differences in financial security and income among racial groups in America are massive. Whereas the average net worth for a white family is approximately $171,000, for a Black family it is a mere $17,600. More than seven million households in the United States have no access to banking products like savings or checking accounts. Almost 23 million more households are underbanked; that is, they have basic accounts but, like the unbanked, use alternative financial services (AFS) such as payday lending, check cashing services, money orders and prepaid cards to pay for everyday items.

AFS are popular because, while their...

The Boston Consulting Group is a leading global consulting firm.

Financial Institutions Can Help Break the Cycle of Racial Inequality
9

Perpetual Debt in the Silicon Savannah
7