Summary of She Said 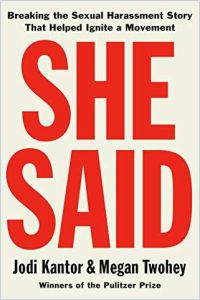 The review below was first published in the getAbstract Journal on Oct 15, 2019.
We’ve reviewed this title for you as we currently cannot offer a summary.

Pulitzer Prize-winning New York Times reporters Jodi Kantor and Megan Twohey broke the Harvey Weinstein story in October 2017. Their coverage gave women the courage to share stories of harassment and assault. Kantor’s and Twohey’s reportage spurred the #MeToo movement forward and opened the floodgates of conversation about sexual harassment and abuse, which eventually exposed powerful predators in the media, entertainment and business.

The Washington Post called this New York Times bestseller, “An instant classic of investigative journalism…All the President’s Men for the MeToo era.” CNN found it, “riveting and, crafted by two of the country’s most talented journalists, a vibrant, cinematic read.” The Atlantic wrote, “the journalists’ clear-eyed record…reads at some moments as a thriller and at others as an indictment of a system full of rot. But it is ultimately about the women, bonded in their pain, who refused to be silent any longer.”