Summary of Something Will Turn Up 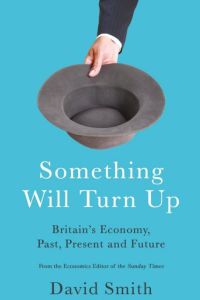 The Sunday Times economics editor David Smith presents a readable, informative history of the British economy since World War II. As a prominent journalist covering economic matters, he draws on a wealth of knowledge and anecdotes. His treatment of the decades of the 1970s and 1980s, in particular, provides a most interesting read. Though written before the Brexit vote, Smith’s straightforward account of a significant chapter in the United Kingdom’s history offers a wise and well-balanced perspective. This is a straightforward historical account without an opinionated viewpoint; little here is personal or contentious. getAbstract recommends this enjoyable overview to students, professors, investors and history buffs.

Economics editor of The Sunday Times David Smith also wrote The Dragon and the Elephant and Free Lunch.

The Decline of British Manufacturing

Great Britain was the first leading manufacturing country. Even as late as 1950, it produced 25% of the world’s manufacturing exports. It generated a trade surplus in manufactured goods that amounted to as much as 10% of its gross domestic product (GDP).

Until the 1970s, the United Kingdom’s West Midlands manufacturing region maintained wage levels just slightly lower than those of the prosperous and diversified southeast region around London. That stands in marked contrast to today’s large income disparity between the regions. When the trade surplus in manufactured goods disappeared in 1982, never to return, it took many well-paid blue-collar Midlands jobs with it.

As the British Empire became the Commonwealth, its countries maintained strong trade links with the United Kingdom, underpinned by continuing preferential trade agreements. In the 1950s, the UK traded 40% of its exports and 35% of its imports with Commonwealth nations. Given the damage World War II had inflicted on mainland Europe’s economy, the captive markets of the Commonwealth gave the UK a postwar advantage. But that contributed to complacency and a lack of...

Which Groups Will Suffer Most as a Consequence of Brexit?
7
From Wall Street to Bay Street
8
The Implications of a No-Deal Brexit
8
Global Waves of Debt
7
Moneyland
8
The Spider Network
8