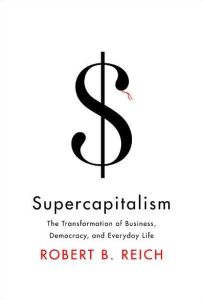 Robert Reich, President Bill Clinton’s secretary of labor and one of the most provocative public intellectuals in the U.S., unflinchingly explores the transformation of American democratic capitalism into a system of “supercapitalism,” in which corporations and the market exercise apparently unbridled power. Reich considers and then discards most, if not all, of the standard leftist explanations for this development. Instead, in a logically coherent analysis, he arrives at some startling but convincing conclusions. For example, arguing that the government should never treat corporations like people, Reich advocates eliminating the corporate income tax. getAbstract recommends this book to anyone who wants to understand today’s economics, politics or fiscal events. Although recent legislation attempts to address some of the issues Reich raises, such as the flow of corporate money into political campaigns, his analysis is still relevant.

The purpose of capitalism is to create wealth. Judged by this standard, U.S. capitalism has been remarkably successful. Companies have steadily become more profitable and more productive, able to do more with less. For the past 30 years, the stock market has been moving up. Even after occasional setbacks, the upward trend has resumed.

However, these economic trends have also weakened U.S. democracy and widened inequality between the rich and the poor. Thus, Americans have both won and lost. As consumers and investors, they have access to more affordable, better-quality goods and a wider range of investment vehicles. They are also more powerful: Consumers and stockholders call the tunes to which business dances. However, as citizens, Americans have lost power.

Contrast the developments of the past 30 years with those of the previous 30. After World War II, income inequality fell, the middle class grew and Americans gained confidence in their ability to influence government for the better. A system of trade unions, corporations, regulatory agencies, community organizations and political parties balanced a wide range of interests. Under “supercapitalism...

Robert B. Reich is professor of public policy at the University of California at Berkeley. He was secretary of labor under President Bill Clinton. In 2003, he received the Václav Havel Foundation Prize for pioneering work in economic and social thought. 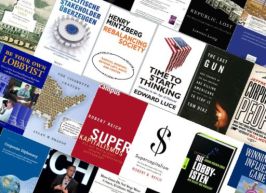