Summary of Take the Stairs

Perigee, 2012
© 2012
From TAKE THE STAIRS by Rory Vaden. Summarized by arangement with TarcherPerigee, an imprint of Penguin Publishing Group, a division of Penguin Random House LLC
ISBN: 9780399537769
Pages: 224 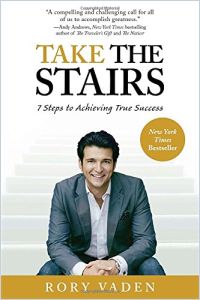 When storms blow in from the West, Colorado’s cows move the opposite way to stay ahead of the bad weather. But slow cows can’t outrun storms, and they end up stuck in the rain, wind, snow and hail. In contrast, buffalo always run directly into approaching storms. As the storms blow in, the buffalo charge through them, quickly passing out of the bad weather. They keep moving no matter how bad the storm. The lesson, courtesy of motivational expert Rory Vaden, is that when life’s storms arrive, don’t run away. Move directly into the worst weather. Confront your problems head-on with faith in your ability to deal with them. Vaden’s motivational manual offers a host of ideas – some super, some a little silly – and introduces the seven strategies of his “take the stairs” philosophy. He provides a step-by-step process you can use to free yourself of mediocrity and embrace self-discipline. To help readers take his uplifting counsel to heart, he includes action items at the end of each chapter.  Vaden’s heartening, insightful guidance will appeal to anyone who’s new to self-help literature and those who are seeking greater composure, courage and accomplishment.

“The Hidden Cost of the Easy Way”

Do you live in “ProcrastiNation?” That’s the place where the inhabitants put off tough things until later, usually meaning never. In ProcrastiNation, people always take the escalator, not the stairs.

If you live there, you aren’t alone; some 95% of the world’s people would opt for the escalator, seeking the easy way out. Everybody wants to succeed, to have good things and to live rewarding lives. Ironically, in the quest for the easiest path, people often make things harder for themselves.

People generally make bad decisions about their own welfare. For instance, 66% of Americans are overweight. Nearly one in three are obese. Some 41% of American marriages fail. For those who marry again, 60% of second marriages end up on the rocks. More than 800,000 Americans have recently applied for nonbusiness bankruptcies. Despite the well-publicized dangers of smoking, nearly 47 million Americans remain hooked on cigarettes.

A lack of “self-discipline” is the main reason people take the wrong path. They assume they can achieve what they want without a struggle. They believe that they can “get rich quick.” They can...