Summary of The Audacity to Win 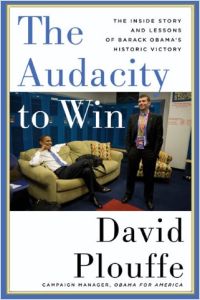 President Barack Obama’s historic political campaign deserves to be studied for its innovative organization, volunteer effort, fundraising and use of technology. But it is also a compelling story about an unlikely candidate and the highly motivated expert team that pulled off one of the greatest game-changing upsets in U.S. political history. Obama campaign manager David Plouffe (rhymes with “bluff”) has written a diary-like firsthand account that delivers insights and perspectives previously known only to insiders. While he tells his story chronologically, the suspense builds as internal and external opponents battle and fall by the wayside. getAbstract recommends this engrossing David-and-Goliath story to leaders, political aficionados, technology and media buffs, and anyone interested in overcoming huge odds to become a winner.

The Audacity of Obama

Barack Obama’s 2008 presidential campaign could be the most unlikely winning effort in U.S. political history. Not only did Obama – a one-term U.S. senator with only four years in the Illinois Senate – beat Hillary Clinton for the nomination, he defeated veteran Senator John McCain to become president, earning seven million more votes than any candidate in history.

This success was not automatic. In fact, supporters pressed Obama into becoming a presidential candidate as the result of the exceptional reaction to his book The Audacity of Hope as well as increased demands, starting in 2006, for him to make speeches to support Democratic candidates nationwide. As recognition grew, Obama offered an alternative to President George W. Bush’s unpopular policies. Momentum climbed as the 2006 mid-term elections gave Democrats control of the Senate and generated the party’s first U.S. House sweep in 12 years.

Voters clearly wanted change. The question was how much. That answer was crucial, since an Obama candidacy would have to derive its energy from the voters’ demand for a clean break from the past. To gauge his chances for success, Obama...