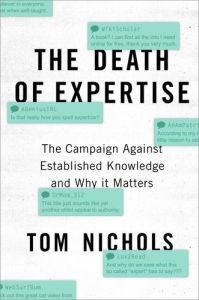 The Death of Expertise

The Campaign Against Established Knowledge and Why It Matters

Tom Nichols, a professor of national security affairs at the US Naval War College, says America has become a country “obsessed with the worship of its own ignorance.” Americans have always been skeptical of intellectuals and experts. Today, says Nichols, that attitude has mutated into outright hostility. In general, Americans have never been so willing to reject the knowledge of those who actually know something. This embrace of self-righteous ignorance bodes ill for the nation’s future. Nichols puts some blame on US universities, which fail to instill critical-thinking skills in students, and on the proliferation of news sources that compete by affirming their audiences’ biases. Nichols’s pessimistic polemic occasionally suffers from a “kids-these-days” tone, and he doesn’t offer much in the way of solutions to the problems he describes. Nevertheless, he provides a focused and frightening snapshot of current US attitudes. While always politically neutral, getAbstract believes Nichols helps laypeople understand the value and limits of expertise and offers insight to experts who are trying to communicate with the public.

Recent decades have seen a drastic shift in how people in the United States view expertise. Americans have always been skeptical of intellectuals – the “eggheads.” But today, laypeople have turned that resentment into hostility and have elevated know-nothingness to a “virtue.” In general, they believe in a distorted type of democratic equality, in which everyone is equally competent and equally capable of handling complex issues. In this view, the judgment of experts in science, politics or the law carries no more weight than anyone else’s opinions.

“We Don’t Need No Education”

As Alexis de Tocqueville observed in 1835, the citizens of American democracy cultivated an attitude of “intellectual self-reliance.” They believed an average person was capable of administering public policy. That attitude endured into the 20th century. But as human knowledge grew larger and more specialized, a gulf grew between laypeople and experts, and it fostered distrust. Laypeople sensed that they couldn’t possibly muster the fundamentals of specialized fields ranging from aviation to medicine – let alone fly a plane or prescribe drugs – and increasingly...

US Naval War College professor and adjunct professor at the Harvard Extension School Tom Nichols is a senior associate of the Carnegie Council for Ethics in International Affairs and a fellow of the International History Institute at Boston University. He won Jeopardy! five times.

Never Go with Your Gut
6