Summary of The Politics of Climate 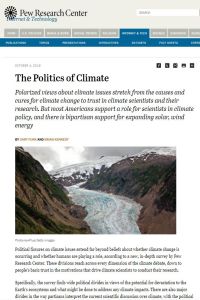 By and large, Democrats believe climate change is happening, that it’s likely to bring environmental calamity and that people can do something about it. Republicans, on the other hand, question the veracity of climate research findings, doubt that human activity influences the climate and think that people’s efforts will have little impact on future climate developments. Researchers Cary Funk and Brian Kennedy at the nonpartisan Pew Research Center further parse these opinions along the fissures of scientific knowledge, gender, race, and other social variables, offering an illuminating atlas of America’s climate politics.

Cary Funk is the associate director of research at the Pew Research Center, where Brian Kennedy is a senior researcher.

Researchers at the Pew Research Center designed a study to gauge people’s beliefs about climate change and to assess the correlations with people’s everyday outdoor and environmental behavior. The researchers created a questionnaire with the assistance of five external experts to survey more than 1,500 randomly selected American adults.

More than half the respondents reported believing that the military, scientists and school administrators are acting in ways that contribute to the public good either “a fair amount” or “a great deal of the time,” though respondents expressed more faith in medical scientists than they did in scientists as a general category.

Religious leaders were right on the cusp; only 13% of respondents said that religious leaders acted in the public interest a great deal of the time, and 39% reported believing that spiritual leaders acted in the public interest a fair amount of the time. Confidence isn’t as high when it comes to the news media, business leaders and elected officials, as less than half of those interviewed ...

Global Warming. Inequality. Covid-19. And Al Gore Is…Optimistic?
9
The European Green Deal
8
The Social-Distancing Culture War Has Begun
8
If we want more companies like Patagonia, we need laws to enforce it
7